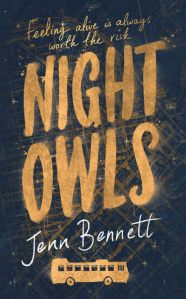 Synopsis from Goodreads: Beatrix Adams knows exactly how she’s spending the summer before her senior year. Determined to follow in Da Vinci’s footsteps, she’s ready to tackle the one thing that will give her an advantage in a museum-sponsored scholarship contest: drawing actual cadavers. But when she tries to sneak her way into the hospital’s Willed Body program and misses the last metro train home, she meets a boy who turns her summer plans upside down.

Jack is charming, wildly attractive, and possibly one of San Francisco’s most notorious graffiti artists. On midnight buses and city rooftops, Beatrix begins to see who Jack really is—and tries to uncover what he’s hiding that leaves him so wounded. But will these secrets come back to haunt him? Or will the skeletons in her family’s closet tear them apart?

Review: I read Night Owls (or The Anatomical Shape of a Heart, as it’s known in the US) for my book club but actually think it would’ve been a title I’d have picked up of my own volition. The blurb sounded really promising and as I’ve been knee-deep in fantasy these past few weeks some contemporary YA romance was looking very appealing!

Night Owls was a distinctly average book for me – a mix of good and not-so-great things. One thing that hooked me was the artist vibe which I found really interesting – I’m not in any way creative at all, and so I find myself in awe of anyone with even a hint of creative talent. I liked how diverse Jack and Bex’s artistic interests were. I had no idea cadaver drawing was even a thing and I liked that despite how male-dominated that particular field is, Bex was the one interested in it and actually it pushed her to get her talent recognised.

Jack’s graffiti was also interesting because it wasn’t your usual pre-pubescent gang tagging nor was it subversive political & social commentary art a la Banksy. It felt more personal and I liked how he chose his words and his canvases and what we learn about his motives for doing something so risky as we go along.

Some other things that really stuck out to me were the portrayal of Bex’s family unit. I liked how close Bex, her mother, and her brother were and how realistic the single parent family setup was. Bennett does not shy away from reality and the difficulties including how both Bex and her brother had to step up and help out for them to get by. The family drama Bex experiences was also interesting to see play out especially the motives behind each character’s actions and how this impacts on the others.

Night Owls was also surprisingly sex-positive. What really struck me was how candid Bex is about her disappointing sexual experiences so far and never feels nor is made to feel ashamed of her experience. The conversations around sex between different characters were healthy and I liked how Bennett does not use LGBT representation as a plot device.

One of the downsides for me was that many of the other characters just did not feel fleshed out enough. Even Jack who is the love interest fell a little flat for me because we were seeing it all from Bex’s swooning perspective. There was a lot of physical descriptions and I just couldn’t see the ‘person’ beyond the manic pixie dream boy aesthetic he had going on. The issues that were framed as his ‘flaws’ felt a bit of a sham to me because it wasn’t directly to do with him/his personality and felt a bit of an inconvenient cop-out that kept Jack pretty damn perfect.

Also, the drama wasn’t the most difficult to guess or follow but it was frustrating that Bex seemed a little too slow at joining the dots, enough that when the reveals came and she was blindsided, the reaction was more facepalm and cringeworthy than anything else. The drama and obstacles to Bex and Jack skipping off into the sunset also didn’t feel very problematic to me and seemed rather easily resolved with a nice neat bow at the end.

Overall, Night Owls was a nice quick read, which didn’t stretch out the drama unnecessarily, it was easy to get behind the romance between Jack and Bex and cheer them on. But ultimately it’s not the most memorable YA contemporary romance I’ve read and didn’t offer anything new or particularly exciting for me to remember it long after I’ve read it.

Have you read Night Owls? What did you think? What are your thoughts on differently named titles in different countries/regions? Let me know your thoughts!!